You may cancel by giving us notice in any of the following ways:

Faulty Items within 28 Days of Purchase 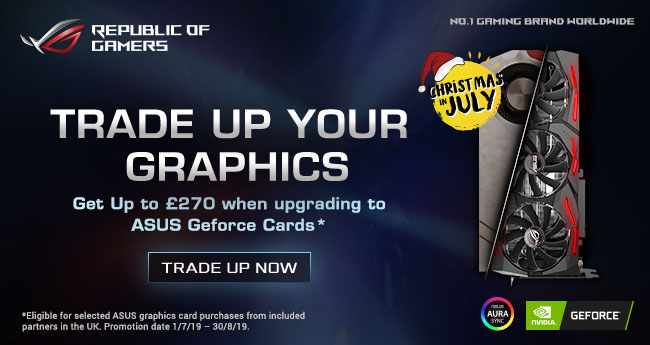 
The Asus NVIDIA GeForce GTX 1650 DUAL OC is powered by NVIDIA's latest Turing architecture normally seen on the powerful RTX Range of GPU's combining the new architecture with ASUS' serious cooling solution, setting the stage for high-stakes gameplay. An automated production process ensures reliability, tried and true fans let Turing's performance shine. And with an arsenal of utilities that allow you to customize and tweak this powerful hardware, you call the shots. With extensive testing the Asus NVIDIA GeForce GTX 1650 DUAL OC has been rigorously put through its paces to make sure it's at it best, ready for you. This GTX 1650 card is a perfect balance of simplicity and performance and with IP5X dust resistance protection will last longer too. Game at higher framerates with NVIDIA G-SYNC and eliminate screen tearing allowing you to enjoy games to their fullest.

Features
- GeForce Experience: The essential companion to your GeForce graphics card. Capture and share videos, screenshots, and livestreams. Keep your drivers up to date and optimize your games.
- Game Ready Drivers: Get the highest levels of performance, and the smoothest experience possible, from the moment you start playing.
- Nvidia Shadowplay: Record and share high-quality gameplay videos, screenshots, and livestreams with your friends.
- Nvidia Ansel: Turn your screenshots into art with this powerful in-game photo mode that captures 360, HDR, and super-resolution photos.
- DirectX 12: Power new visual effects and rendering techniques for more lifelike gaming.
- Nvidia G-sync & HDR: Get smooth, tear-free gameplay at refresh rates up to 240 Hz, plus HDR, and more. This is the ultimate gaming display and the go-to equipment for enthusiast gamers.
- Virtual Reality: By combining advanced VR rendering and AI, the GeForce GTX will take VR to a new level of realism.
- 4K Gaming: Step up to the ultimate 4K gaming experience with the GeForce GTX and enjoy today’s biggest games in amazing detail.

Benchmarked for Top Gaming Titles
ASUS's extensive performance and stress tests begin with the very latest chart-topping titles — like Fortnite, League of Legends, Overwatch and PlayerUnknown's Battlegrounds. ASUS also carry out reliability trials that include a 144-hour stability test and a series of 3DMark benchmarking runs to ensure the card performs well when pushed to the limits.

Up to 6 Times Faster
The GTX 1650 GPUs are powered by the Turing Architecture, this gives you 6x faster performance over previous-generation graphics cards. Turing uses a new 12nm manufacturing process bringing the latest most powerful GPU architecture to the GTX series.