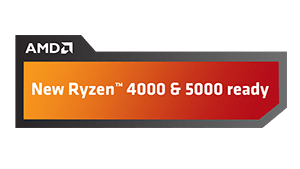 
CPU Fitted Options - When purchased with a discounted CPU the CPU is fitted to the board, serial numbers logged and the cooler is shipped in a plain black AMD box. Both Items have 3 years warranty.

PCIe 4.0-Ready
ROG Strix B550-F Gaming features two M.2 slots, one of which supports the latest PCIe 4.0 standard to provide maximum storage flexibility and the fastest data speeds available via the 3rd Gen AMD Ryzen platform. Both M.2 slots support up to the type 22110 socket and NVM Express® RAID for a performance boost.

Outshine the Competition
ROG Strix motherboards deliver sterling performance and superior aesthetics to outshine the competition. They also feature built-in ASUS Aura technology that enables full RGB lighting control and a variety of presets for embedded RGB LEDs as well as lighting strips connected to onboard RGB headers. In addition, all lighting can be easily synced with an ever-growing portfolio of Aura-capable ASUS hardware.

FREE Delivery 5-6 working day is available to the UK Mainland only.

Express services are available at an addition cost such as, DPD, Royal Mail & UPS.

Ordering a PC? Please be aware that our PCs come with a build time, which is not your delivery time. For an accurate estimate on when to expect your PC, please calculate both your build time and delivery time in working days. On the morning of your delivery date, you will be notified with the estimate delivery slot.